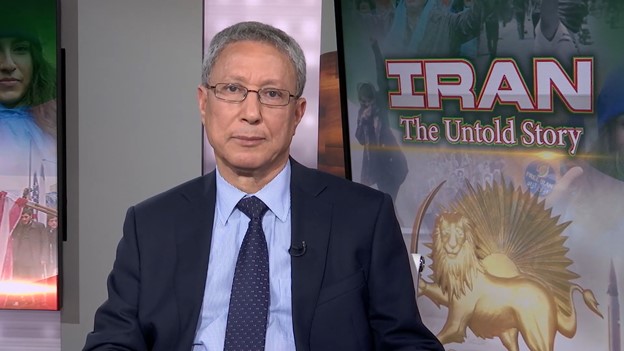 But in the 1980s, he says the Iranian regime imprisoned him for nearly 8 years—just for his political beliefs.

Ahmady: “When I was in prison, I saw with my own eyes how violently the regime treats anyone accused of supporting the MEK.”

As a young man, Ahmady supported the MEK, the main Iranian opposition group. The prisons were full of MEK supporters, who were tortured and executed.

Today, he cries and says he is not lucky to have survived, and respects those who made the ultimate sacrifice for their beliefs.

A recent Amnesty International report says thousands of Iranians were executed by the regime in 1988, including teenagers.

Some estimate that as many as 30,000 people were massacred.

Families were kept in the dark.

Linda Chavez: “It was a mass massacre. It was the state and its various organs that were rounding up people, imprisoning them, torturing them, and ultimately executing them.”

Philip Luther, Middle East and North Africa Research and Advocacy Director at Amnesty International: “After months of being lied to by the authorities, they began to learn the devastating truth—the authorities had executed their relatives, in secret, and dumped their bodies, at night, mostly in unmarked mass graves.”

Mother Ebrahimpour echoes the sentiments of many Iranian-American community group members: “I want to know where my children’s graves are. I need to know where they are. I need to know so that, if I ever return to Iran, I can go and rest my body where they have been buried. I was never able to grieve for my children. I want to go and be with them.”

Ayatollah Ruhollah Khomeini issued this “fatwa” calling for the deaths of MEK and other political prisoners.

Some of the officials blamed for the massacre today hold top regime jobs, including Iran’s current chief justice and justice minister.

Ahmady wanted justice so badly that, as a volunteer, he raised funds for the MEK when it was blacklisted by the Clinton Administration—what some said was a goodwill gesture to the mullahs. He pleaded guilty in 2009 to federal charges and received two years’ probation. The MEK was delisted in 2012 after a court victory.

Ahmady: “How can they hang all these people simply for their beliefs and ideals and for wanting freedom? 30,000 people, among them some of my own best friends, were hanged for supporting the MEK.”

Buck SEXTON:  Welcome to our series, Iran: The Untold Story. This week we explore one of the most horrific moments in Iran’s recent history, the killing of thousands of political prisoners by the Iranian regime.

SEXTON:  We’re joined now by Mr. Tahar Boumedra, human rights lawyer and former chief of the UN Human Rights Office in Iraq. Thank you so much, sir, for being here. We appreciate it. So please, tell me, you’re a board member of justice for victims of the 1988 massacre in Iran and have researched the killings. Tell everybody what happened in 1988.

Tahar BOUMEDRA:  Well, first let me say that JVMI, short for justice for the massacre of the Iranian political prisoners in Iran, 1988. This association is formed by the families of the victims of such a massacre. The JVMI has undertaking some inquiry and have produced this report. It contains overwhelming evidence that there is a crime that amounts to a crime against humanity that did take place during the summer of 1988 in Iran.

SEXTON:  Can you explain what happened? Who was on each side of this? Who were the perpetrators, who were the victims, and what led up to this?

BOUMEDRA:  Basically, it was a decision by the Supreme Leader of the time, Khomeini. Khomeini has decided that the opposition that has did not sort of behave in a docile way, had to be eradicated, annihilated, and therefore to protect the Islamic Republic there is no room for any opposition. And the only way of getting rid of the opposition is to issue a fatwa to kill them all.

SEXTON:  What did this opposition initially want? What were their demands of the Khomeini regime that led to this, this moment where Khomeini finally decided that he wanted to eradicate them?

BOUMEDRA:  First of all, the opposition challenged the Supreme Leader by refusing the theory of Velayat-e faqih it means a sort of a divine will to implement the God’s commands by the leader of the time, Khomeini. And the opposition in general did not take this kind of theory, which is refused actually by all religious jurists, whether in Iran or outside Iran.

SEXTON:  And this opposition, this is the Mujahedeen-e-Khalq, or are there other elements that were also encapsulated in this?

BOUMEDRA:  There are a number of groups, political groups challenging this theory. And the Mujahedeen-e-Khalq, or MEK, have taken the lead in this position because it has proved itself very familiar during the ‘80s.

SEXTON:  Bring me back to the 1988 massacre at the hands of the Iranian regime. How many people are estimated to have been killed?

BOUMEDRA:   You see, the investigation has proven that a crime has taken place. Now, the figure is it’s not really important to give a figure because the whole point is about the question and inquiry into this massacre. Figures, different figures have been given, mainly 30,000 political prisoners. Others have stated a number of 33,000. Amnesty in early reports issued or stated the number of 7,500. The special rapporteur of the United Nations of the time, also stated a figure, but for us, this is not important. For us, up to today, no inquiry, no independent inquiry has taken place. And this is why figures are not important, what is important is that all agree that there is a crime that took place. Annihilating political prisoners was done by a fatwa issued by Khomeini.

SEXTON:  Tell me about this fatwa that was issued by the Islamic Republic’s leader, Ayatollah Khomeini. Did this lead to death commissions? Were there trials? What did the fatwa itself state about the opposition?

BOUMEDRA:  In a word, I would say, which again the fatwa is documented in this book, but it said kill them all, even with a summary kind of trial, because he ordered the setting up of what he called the commission of amnesty while the opposition calls it the death commission. So this death commission is composed of three elements representing the Minister of Interior and the Minister of Intelligence. And the proceedings that last more than three, four minutes. And the purpose is kill them unless they repent and they repent publicly on television. Those who refuse to repent publicly, they are selected for execution.

SEXTON:  Did the victims of this politically motivated massacre include women and children or was it limited only to adult males?

SEXTON:  Is there any doubt at all, does any who is credible question that the Iranian regime was responsible for this massacre? This was ordered from the top down?

BOUMEDRA:   The evidence is quite clear and it has been revealed recently by the figure, a very prominent figure in the regime, Hussein Ali (Montezeri). He reported the decision of Khomeini, or the fatwa, in his memoirs published in 2000. And in August, 2016, his son, the son of (Montezeri), had published a recording, audio recording, where the number two of the regime had warned that history will catch up with us, the regime, if we go on executing people with this manner, without a due process of law and without a fair trial.

BOUMEDRA:  It refuses to adhere to the theory of Velayat-e faqih And this is very important for the Iranian regime because whoever does not—and this is even written in the Constitution, that the theory of Velayat-e faqih, whoever doesn’t adhere to it, cannot be included in the power apparatus and therefore the MEK which doesn’t adhere to this theory had to be excluded. And because the MEK is active among the population, they found themselves trying to be eradicated, excluded and terminated in fact.

SEXTON:  So you worked at the UN for quite some time. What did the United Nations do about this massacre in 1988 of Iranian dissidents?

BOUMEDRA:  The thing is, the United Nations has been monitoring this situation of human rights in Iran from the ‘80s, beginning of the ‘80s they already have a special rapporteur on the human rights situation in Iran. And this is very unprecedented for a country to be watched all the time. Iran is the only country in the world that had a special rapporteur watching and observing the situation since the ‘80s up to today. So, this is in itself a quite serious warning to the regime. But you know, the United Nations has its own kind of approach to these issues, and the power politics also, political expediency always comes into play. So, no serious attempt to sort of point to the perpetrators, and whenever the UN tried to sort of use a robust kind of approach, they were banned from visiting Iran.

SEXTON:  What do you want the world community to remember about this massacre and what would you want them to do today?

BOUMEDRA:  What we are actually doing both in Geneva and in New York is to say to the world community, through the United Nations institutions, that a very serious crime did in fact take place. The perpetrators were identified and they actually confessed, including highly placed individuals in the government of Rouhani. So, having these people confessing and having the crime being documented not only by NGOs but by the United Nations as well. So this makes it a very serious crime that the international community need to follow up and the United Nations is expected to set up a commission of inquiry to shed the light on the perpetrators, hold them accountable, and bring them to justice.

SEXTON:  Thank you, Mr. Boumedra, we appreciate your time.

SEXTON: Coming up next on Iran: The Untold Story, we explore the MEK, the main Iranian opposition group.