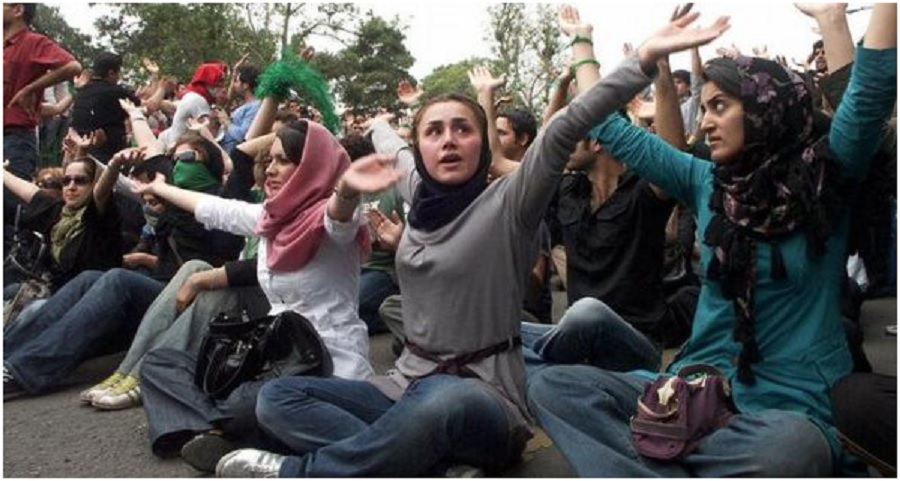 As the full slate of Trump administration-imposed sanctions on Iran snapped back into effect on Monday, a number of Iranian women continue their opposition to the regime as the only way to bring about change – even if it means being labeled a terrorist.

“The regime is thirsty for our blood. We are faced with the danger of being killed or arrested or tortured all the time,” Maryam, a 40-year-old dissident from the city of Abadan, in Khuzestan Province, told Fox News. “But we have a commitment to freedom, so we have to sacrifice everything and forego many things such as a job and travel.”

Maryam said she was purged from her position as a school teacher during Hassan Rouhani’s first term in 2014 and is now a full-time housewife and opposition activist. She distributes leaflets, works the crowd at demonstrations, and shoots videos of “the martyrs” at gravesites “for the purpose of documenting them” for their families – and posterity.

She has also been arrested and recalled the nightmare of her detainment.

“There were no separate male and female toilets. The walls were covered with blood. I was blindfolded during my interrogations, and even in my room, if the door or window was opened I had to be blindfolded,” Maryam said. “During my interrogation, the interrogator was very close to me and kept swearing at me. When his yelling did not give him a result, as I was ignoring him, he hit me. A few blows to the head and I was unconscious.”

Saba, a 38-year-old housewife in Tehran, described her activist work as “the struggle to oppose the darkness.” For the past two-and-a-half years, she professes to have been focused on “writing slogans on walls, hanging opposition posters on walls and bridges, attending demonstrations and offering aid during natural disasters,” such as the recent earthquake in Kermanshah.

“I have had many scary and daunting moments, moments when I could feel my heart throbbing in my throat,” Saba said. “One morning at about 6 a.m., I went to a park to put up about a dozen posters. And as soon as I did, I realized someone had been watching me from a distance and was approaching.”

Gripped with anxiety, Saba recalled that she slowly started to walk away, faster and faster, until she was running as a man loomed behind her. She slipped into an alley, and behind a parked car where she waited for other women, also draped in chadors, to enter the area, she mingled among them. It wasn’t her first near-arrest, nor would it be her last.

Sepideh, a self-described artist and poet from Alborz province, vowed she, too, is part of the “resistance units,” and “constantly takes part in protests and uprisings against the repression of this criminal regime.”

“It is for freedom, equality, and justice – things that I have never experienced in 37 years of my life. I am a poet and yet am not allowed to publish my poems in Iran,” Sepideh lamented. “The Iranian women have faced the most severe injustices and pains. The pain and suffering of my people, my nation, are my pains. One day I said to myself that I have to take a stand and put everything, including my life, on the line to overthrow this despicable regime.”

Sepideh said she constantly “takes part in protests and uprisings against the repression,” and takes on tasks such as putting up banners, distributing opposition leaflets.

“On several occasions, I have gone to the brink of being arrested. One of the regime’s mercenaries kicked me to the ground and took away my mobile phone,” she recounted, referring to Labor Day protests in May. “With the intervention of others on the scene, I was able to run away.” 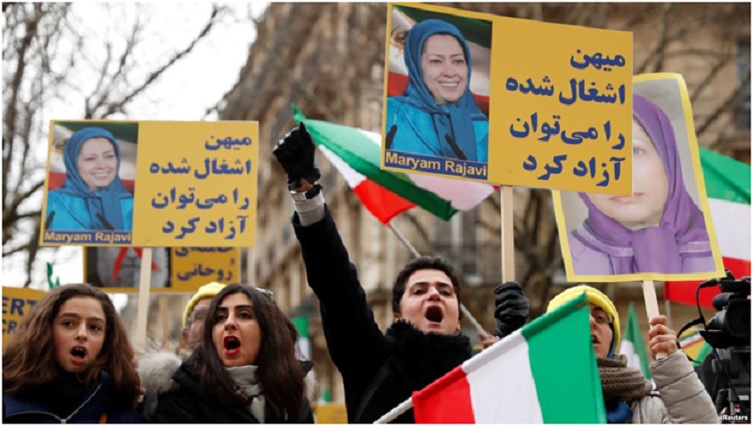 Photographs of the women could not be published for safety reasons, with each fearing apprehension by authorities. They are all considered to be connected to a terrorist movement: The controversial Mujahedin-e Khalq (MEK) – also referred to as the National Council of Resistance of Iran (NCRI).

The Paris-based opposition group, which was once a U.S.-designated terror group, and is still top of Tehran’s terror list, provokes deep divisions among Iranians.

The Iranian leadership has long classified MEK as a terrorist organization, not only for its present opposition but for siding with Saddam Hussein during the devastating Iran-Iraq war of the 1980s. The Iranian government also blames the MEK for the deaths of more than 12,000 Iranians over the past three decades.

“Most of the country who don’t like the clerical order want to see more democracy rather than another political elite dominating the country,” surmised Kamran Bokhari, a specialist on the geopolitics of the Middle East with the University of Ottawa’s Professional Development Institute, noting that he has “found no evidence” of widespread support for the controversial political opposition from within Iran.

The MEK was designated a foreign terrorist organization by the U.S. State Department in 1997 but was removed from the list in 2012. Eight years earlier, then-U.S. Secretary of Defense Donald Rumsfeld designated the group as civilian “protected persons” under the Geneva Convention. Today it heralds support from the likes of Trump attorney Rudy Giuliani, National Security Adviser John Bolton and James Jones, National Security Adviser to former President Barack Obama.

“This is the first time I see hope that there can be real change in Iran,” Giuliani has said of his affinity for the organization.

Nonetheless, a spate of protests has taken place across Iran for most of the year, attended by those with and without any broader political affiliation.  And as they have in the past, women have been crucial players in many of those demonstrations.

As a result, Iran’s Ministry of Intelligence and the Revolutionary Guards have arrested and summoned droves of women perceived to be dissidents over the years – including lawyers, teachers, sociologists, students, and stay-at-home mothers. As the numbers of arrests grew, so too did concerns over the conditions in which they are being held. Stories of torture, rape, physical abuse, sleep deprivation, and solitary confinement have long trickled out of Iran’s penal establishments.

According to the most recent statistics provided by World Prison Brief, more than 230,000 people are behind bars in Iran. And 3.1 percent, or around 7,130, are female. At least 9000 are estimated to have been arrested over the year, with some 1000 during the month of August alone.

“There are so many women activists in the prisons,” Sepideh stressed. “I know what I am doing. I know all the dangers, but will continue this fight.”

Tehran government officials have routinely dismissed protests as insignificantly small, and say that the opposition groups behind them are being orchestrated from the outside, by the United States and Saudi Arabia – Iran’s greatest rival in the region.

As for how the renewed sanctions will impact Iranians and their support of opposition groups, experts say it’s too soon to say.

“Sanctions are bound to exacerbate Iran’s economic situation and stoke discontent,” cautioned Ali Vaez, Director of the Iran Project at the International Crisis Group. “There might be protests in the coming months. But the country does not seem to be in a pre-revolutionary phase, as there is no viable alternative to the existing regime, which for its part retains the will and a fearsome capability to repress. The Iranian opposition in exile remains in disarray.”

In preparing Iranians for the renewed sanctions, Rouhani last week said the country faces challenging times ahead, but insisted the government will do its best to allay the hardships and “injustice” from the U.S. Mass demonstrations took place in Tehran and other major cities over the weekend, in which the US flag was burned as hundred expressed their grievances as the sanctions came into effect.

Yet those who support the Trump administration’s hardline approach insist only the regime – not the people – will be brought to the brink. U.S officials have vowed that the goal is to dramatically curtail Iran’s oil exports and drive the Tehran leadership to its knees.

“We will place tough sanctions on #Iran’s ruling regime. Our aim is to compel Iran to abandon its destructive activities,” tweeted U.S Secretary of State Mike Pompeo. “The sanctions will target the regime—not the people, who have suffered the pain of their government’s mismanagement, theft, and brutality.”

On November 5, we will place tough sanctions on #Iran’s ruling regime. Our aim is to compel Iran to abandon its destructive activities. The sanctions will target the regime—not the people, who have suffered the pain of their government’s mismanagement, theft, and brutality.

And at least a portion of Iranian women – quietly and not-so-quietly – are on board with that.

“Despite all the pressures and difficulties, we will not tire. Neither arrest or torture or interrogators yelling and the fear of being hanged will prevent us from continuing our struggle,” Maryam added. “We will continue until we get out freedom.”

Hollie McKay has a been a Fox News Digital staff reporter since 2007. She has extensively reported from war zones including Iraq, Syria, Yemen, Afghanistan, Pakistan and Burma and investigates global conflicts, war crimes and terrorism around the world. Follow her on twitter and Instagram @holliesmckay

Previous « Two arrested for allegedly spying for Iran in U.S.
Next The UNGA condemns the Iranian regime’s human rights violations, for the 65th time » 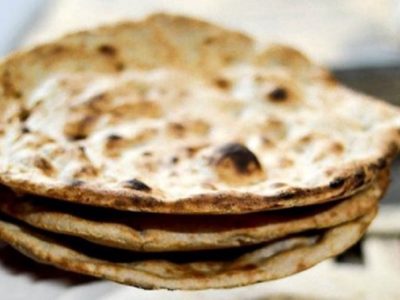 Iran: Bread Protests Are on Way, Stronger Than Gas Protests