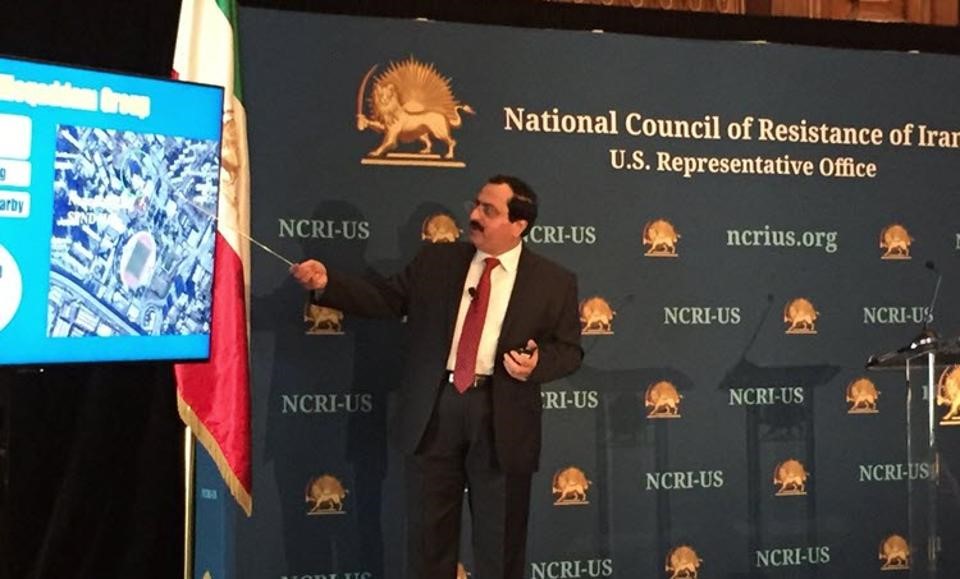 Iran is cheating on its historical deal with the U.S. by secretly conducting research into nuclear weapons components such as bomb triggers and enriched uranium, the main Iranian opposition group said Friday.

The regime is doing engineering and weaponization testing at a walled military complex south of Tehran, a location which Iran has declared off-limits to inspectors, said the National Council of Resistance of Iran (NCRI) and its main operational arm, the People’s Mujaheddin of Iran (MEK).

“This is the site that has been kept secret,” said Alireza Jafrazadeh, NCRI’s Washington office deputy director. “There is secret research to manufacture the bomb and basically cover up the real activities of the Iranian regime.”

The 2015 Joint Comprehensive Plan of Action (JCPOA), negotiated by the Obama administration, has become a major foreign policy issue for the Trump White House as it evaluates whether to reimpose economic sanctions on Tehran. Iran has benefited with billions of dollars in freed-up funds while it pursues interventions in Iraq, Syria and Yemen against U.S. interests.

The NCRI-MEK report came the day after Secretary of State Rex Tillerson lambasted Iran for its expansionist terrorist activities in the region which he said violated the spirit of the JCPOA. He called the deal a “failed approach” since Iran can break out and build bombs after 10 years.

The JCPOA outlaws the type of weaponization work described by the NCRI-MEK report.

The State Department reported this week that Iran was abiding by the deal hammered out by former Secretary of State John Kerry and approved by Russia and other powers.

The NCRI rebutted that conclusion during a press conference in Washington by saying it is providing new information on Iranian misdeeds.

The council and MEK have a good track record over the years of disclosing Iranian nuke programs that operated under the radars of Western intelligence agencies. It boasts an extensive spying network inside the Defense Ministry, Islamic Revolutionary Guard Corps and other organs of the hard-line Islamic state ruled by religious mullahs.

The NCRI asserts that Iran’s so-called “declared” sites were not disclosed by Iran, but by the intelligence work of MEK.

The heart of the NCRI-MEK intelligence report is a research operation known as the Organization of Defensive Innovation and Research (SPND) and its seven subdivision, which MEK said it first exposed in 2011.

“They are carrying out their research in various fields related to the manufacturing of a nuclear weapon,” the council’s report said. “In some of these fields, new initiatives have also been undertaken in order to keep the real objectives of the research a secret and to cover up the real activities.”

One those subdivisions, the Center of Research and Expansion of Technologies on Explosions and Impact (METFAZ) works on triggers and explosive yields, the statement said. The MEK disclosed METFAZ’s existence in 2009.

The MEK said METFAZ is operating in a secret location unbeknownst to the International Atomic Energy Agency (IAEA), the world’s nuclear watchdog. In official communications, the regime refers to it as the code name “Research Academy.”

The council investigation said that for the mullahs to continue METFAZ’s work undetected, they downsized a center in Sanjariana and transferred the research and testing to a new site in the military district of Parchin 20 miles south of Tehran.

“We are disclosing this for the first time today,” Mr. Jafrazadeh said. “They felt this was optimum location for shielding the actives of METFAZ.”

Reporters asked Mr. Jafrazadeh why the U.S.’s latest 90-day report to Congress say Iran was complying if it is now cheating.

He answered that the assessment is based on the IAEA monitoring known sites and measuring technical metrics, such as the amounts of enriched uranium.

He said that what the council is disclosing is secret weaponization work that now needs to be investigated. He said the council provided its report in the last few days to the Trump administration and the IAEA.

“We’re talking about an extensive covert operation by the Iranian regime,” he said.

Mr. Jafrazadeh said that when the IAEA visited a limited number of sites at Parchin in 2015, Iran had cleansed them of weaponization evidence.

“It needs to be inspected immediately,” Mr. Jafrazadeh said. He predicted this new intelligence report will prompt Iran to “clean out” its illicit work.

Iranian Supreme Leader Ali Khamenei has said that “inspection of our military sites is out of the question and is one of our red lines.” A number of Iranian leaders have repeated that warning in recent months.

The MEK provided satellite photos and descriptions of the exact locations of nuclear research inside the Parchin complex, such as “Plan 6” which is located at “the end of Babaj highway, Khojir-Parchin military road, after the tunnel on the southern side of Mamlo Dam.”

The site is protected by the Islamic Revolutionary Guard Corps, the dominant security force inside Iran.

The report described the musical chairs this way: “The move resulted in the subsiding of activities at the Sanjarian site. The Iranian regime has done its utmost to keep the Research Academy, which is an important site, a secret from the eyes of international organizations. The reason for the move was based on the conclusion reached by regime officials that the probability for the IAEA to get access to Parchin in the future is extremely low, which means that the site is an optimal location for shielding the regime’s activities in this regard.”

To bolster its findings, the MEK released what it said are the nuts and bolts of Iran’s cheating, such as the identities of 15 METFAZ personnel and their jobs descriptions, and addresses of various secret sites.

The SPND network is headquartered in Tehran in the “Nour Building,” near the Defense Minister which supervises operations.

“In order to understand the regime’s secret and illicit activities, it is critical that the IAEA inspect and monitor not only the Research Academy, but also all other sites related to SPND,” the NCRIR-MEK said. “This will help shed light on the scope of the regime’s secret military and nuclear activities.”

It added, “The weaponization program must be totally dismantled. There is no reason to maintain SPND, and all its subordinate organizations, including METFAZ. They have no peaceful, energy use whatsoever and, their only function is to facilitate the development of the nuclear bomb.”

Mr. Jafrazadeh termed as “ridiculous” Iran’s restrictions on military site inspections since it is the military that oversees nuclear bomb research.

The Washington Times asked the State Department to respond to the NCRI-MEK investigation.

A spokesman referred to Mr. Tillerson’s April 18 letter to Congress certifying that Iran is in compliance. Mr. Tillerson added that the Trump administration will conduct a review of whether the suspension of economic sanctions under JCPOA is in the U.S’s interest.

“Notwithstanding, Iran remains a leading state sponsor of terror through many platforms and methods,” Mr. Tillerson wrote.