For weeks, self-proclaimed “moderate” Iranian officials like Foreign Minister Javad Zarif have been saying that their country would struggle to distribute vaccines and manage its coronavirus outbreak as long as U.S. sanctions remained in place. Although the sanctions include exemptions for medicine and other humanitarian goods, the regime still insisted that foreign pressure was the primary or sole obstacle to a more effective government response to the historic pandemic.

Iranian opposition and activists strongly reject the claims made by the regime’s leaders and charge them with intent to refrain from combating the spread of COVID-19 for two reasons: blaming the outside world for their mismanagement and, more importantly, using the pandemic as an additional means to stem growing popular discontent and unrest, which is threatening the government’s survival.

Iran had been the scene of recurring protests on a grand scale for more than two years before the pandemic began. In the final days of 2017, a protest against flagging economic indicators broke out in the city of Mashhad and quickly began to inspire similar but more broadly focused demonstrations in other cities. By the middle of January 2018, the uprising had spread to well over 100 cities and towns, wherein people from remarkably diverse social and ethnic backgrounds all joined together in repeating slogans like “death to the dictator.”

In November 2019, nearly 200 cities rose up, prompting an especially hysterical response from regime authorities. The IRGC responded by opening fire on crowds using live ammunition, and human rights defenders like Amnesty International later observed that they had clearly been shooting to kill. The death toll from the November 2019 uprising was estimated at 1,500.

The severity of that crackdown lends some credence to the opposition claim that the clerical regime is willing to sacrifice a yet-to-be-determined number of its own citizens in order to maintain its hold on power. But that conclusion already had support from key moments in the history of the Iranian regime. Among them are instances of politically motivated killings like the massacre of 30,000 imprisoned dissidents during the summer of 1988.

Many observers seem to have forgotten the inherent lessons about the nature of the Iranian regime. If they had not, they wouldn’t find it difficult to imagine that Tehran, fearing the inevitable recurrence of mass uprisings following the end of the pandemic, is deliberately drawing out Iran’s coronavirus outbreak in order to keep society in a state of fear, submission, and dependency.

That is also the most rational explanation for some of the key decisions the regime has made throughout this crisis. After expressing weeks of hostility toward the idea of distributing foreign-manufactured coronavirus vaccines, Supreme Leader Ali Khamenei took the astonishing step of banning their import. This effectively canceled the planned distribution of 150,000 Pfizer vaccines that had been offered, free of charge, to Iran by unnamed American philanthropists.

Khamenei’s decision all but guarantees infections for at least 150,000 people who might otherwise have avoided contracting COVID-19. From them, the infection will inevitably spread to others, and the death toll will continue to climb. Opposition’s network within the country have followed developments in hospitals and morgues closely since the beginning of the pandemic to determine that more than 200,000 Iranians have died so far, with no end in sight.

So, there should be no more credence given to the false claims of “moderates” who say the severity of Iran’s outbreak is the fault of the United States or the United Kingdom.

It was not U.S. sanctions that stopped Iran from obtaining vaccines; it was the leader of the clerical regime. Meanwhile, Americans made every effort to help Iranians obtain those vaccines while figures like Zarif were telling them to simply get out of the way. Now that the absurdity of these appeals has been revealed for all to see, it should be clear that the role of Western governments and organizations should be expanded, not diminished.

In the first place, they will be compensating for the harm the regime has done over the past year, and in the second place, they will be helping to create the conditions in which those people can resume their protests against a regime that would sooner kill them all than relinquish even an ounce of its power. 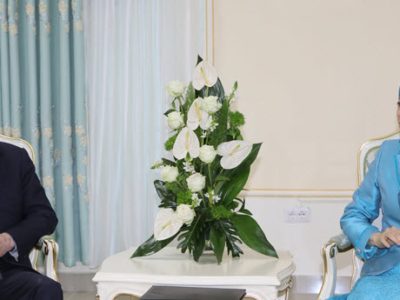 The sad truth about the Iran deal