Western policymakers and the entire international community should make it clear that they support any effort by the Iranian people to push back against state repression and to advocate for democracy.

Candidates in the Iranian regime’s next presidential election in June include alleged mass murderers, corrupt embezzlers, subjects of both European and American sanctions for human rights abuses, and persons who have been implicated in foreign assassinations and bombings.

The presumptive front-runner is Ebrahim Raisi, who was one of the leading perpetrators of the massacre of 30,000 political prisoners in 1988.

No wonder that the majority of Iranians are expected to reject the elections entirely. Various Iranian officials and state media outlets have already warned of this possibility.

Beyond that, the elections, which are widely regarded as a sham, take place against the backdrop of major uprisings.

In the final days of 2017, protests broke out in Iran’s second most populous city of Mashhad that immediately spread to dozens of other cities, with democratic change being the rallying cry. Another uprising in November 2019, which presented the clerical regime with an even greater challenge. Terrified of the breadth and organized nature of these uprisings, authorities opened fire on crowds, killing approximately 1,500.

Persistent anger over that crackdown on dissent may have fueled last year’s boycott of the parliamentary election. It is now emerging as a driving force behind the prospective boycott of next month’s presidential election. This fact was recently underscored by a video that circulated on Iranian social media in which the mothers of activists who had been killed during the November 2019 uprising made it clear that their only vote is “overthrow” of the regime.

One of the grieving mothers noted that elections have merely served as a façade for a theocratic dictatorship over the course of four decades. “If our vote was supposed to fix anything, it would have happened in the last 40 years, but it did not,” she said. “The past 40 years led to November’s mass murderer of the youth, this land’s greatest treasures.”

In recent weeks, retirees and pensioners have staged over a dozen protests, each spanning multiple cities. The government has offered little to no response to their demands for an economic policy that shrinks the gap between their stagnant income and the rising cost of living. As a result, the most recent of these protests adopted slogans such as, “We have seen no justice; we will not vote anymore.”

Similar slogans were taken up by protests that focused attention on the regime’s theft of people’s savings in the stock market. For those who lost savings and joined the massive ranks of impoverished Iranians, it was clear that the regime’s graft permeated the political hierarchy and left no one with an interest in reforming the system.

The current president, Hassan Rouhani, has served as the standard-bearer for the “reformist” faction over the past eight years, and he neither opposed the mass killing of protesters last November nor criticized the further consolidation of national wealth into a small number of institutions, mostly controlled by Supreme Leader Ali Khamenei and the Revolutionary Guards. The Iranian oppositional group, the National Council of Resistance of Iran has been a proponent of election boycotts for many years, and in 2013 it fervently pushed back against the narratives in some Western policy circles which held that a “reformist” president might affect meaningful change in Iran’s domestic conduct and its relationship with the international community. This year is no different, as opposition activists have launched a campaign urging the citizens to boycott the election farce.

The vast majority of Iranians have unequivocally rejected such narratives, and many have taken the logical next step of endorsing regime change and working toward it through the mass uprisings in 2017-2018 and 2019.

Western policymakers and the entire international community should make it clear that they support any effort by the Iranian people to push back against state repression and to advocate for democracy. The recent growth in public protests has led opposition activists to predict that a successful electoral boycott could be a precursor to further unrest similar to the November 2019 uprising. Iranian officials and media outlets have warned about the same possibility, and have implicitly raised the prospect of launching an even more aggressive crackdown on dissent to counter what may be the greatest challenge so far to the mullahs’ regime.

Only the immediate and overwhelming threat of a coordinated international response can guarantee that the bloodshed from forthcoming uprisings will not be worse than that which occurred during November 2019. If policymakers offer no such threat, they will be turning their backs on the Iranian people, thereby solidifying the position of a nuclear-keen theocratic dictatorship that is desperately struggling to find a lifeline. 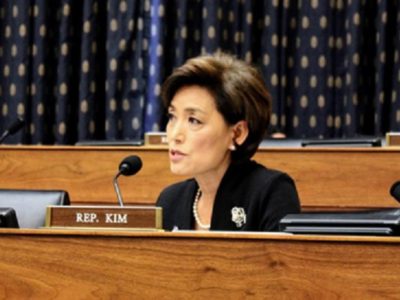